During the day, we say an average of 16,000 words. Men speak almost the same as women, and in Professor Matthias Mehl’s study, as many as three of the most talkative respondents are men who say as many as 47,000 words a day (⚠️ logical fallacy ☞ referring to common practice – women are more talkative than men. Are they?). There are over 220,000 words in English, similar to Serbian. There are about 7,000 different languages spoken in the world, although half of the planet speaks a total of 23 languages. About how language originated, why it is important not only as a means of communication but also as a tool for change and a resource of opinion, I will write in numerous texts in the future. Today we begin by studying beautiful thoughts that are inspired by beautiful and intriguing words, concepts, and phrases that are less known. You will find them under the hashtag #GRWTHWord.

Today’s word is a parable (ancient Greek παραβολή, comparison). This melodious word is a form of deep literature, but also a philosophical concept. Parables carry educative lessons, but primarily drive us to think. When it comes to structuring, they are similar to fables, but differ from them in the type of characters – parables describe educative life situations (real or imagined) in which the main actors are people. The most famous parable is certainly the one about the cave, Plato’s Allegory of the cave. Some other that I gladly remember is “The Good Samaritan” (who is your friend – the one who helps you or the one who should help you) and “The Rooster Prince” (in order to help them you have to understand them, and then from their point of understanding initiate desirable behavior). 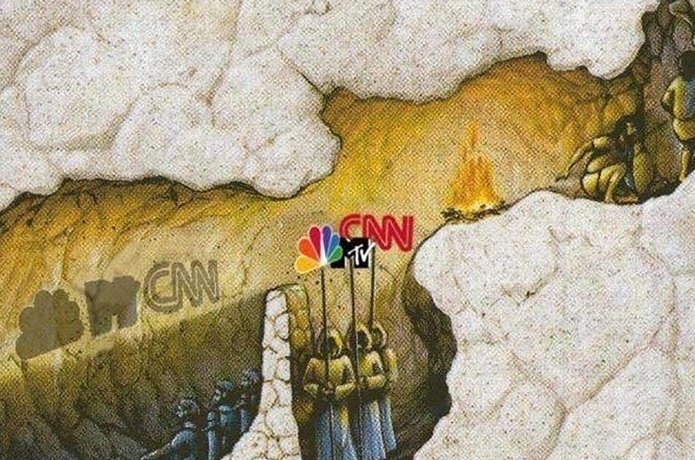 Allegory of the cave

Plato presented his teaching on knowledge in an allegory of the cave in the seventh book of Statesman (dialogue). He asks us to imagine a cave. People, who have been imprisoned there from childhood, are chained so that their necks are fixed, gazing at the cave wall in front of them. Because of the irons, they cannot look around and cannot see anyone next to them nor the exit from the cave that is behind them.

The only source of light in the cave is fire. There is a wall between the prisoners and the fire, a screen behind which there are other people walking, carrying objects or puppets “of men and other living things” made of stone and wood. Those who are chained and look at the wall, because of the fire, can see the shadows of themselves and the shadows of the objects behind them. As they walk, some people behind the screen talk to each other, and others are silent. The sounds of the people talking echo off the walls of the cave where the shadows play, so the prisoners believe these sounds are real and come from the shadows. As they have nothing to do, they have fun talking about the shadows, guessing which shadows will pass again and in which order. Those who score the best, receive honors, and are respected by others.

Plato then supposes, and that is what we need to imagine next, that one prisoner is freed. Let’s imagine what would happen if one of them was released and forced to stand up, turn around and walk towards the light. The sunlight would hurt his eyes because he was only used to the darkness, and he would not be able to see things clearly. Once he got used to the light, he would see what was really happening behind the wall in the cave and he would become aware of the delusion he had been in until then. Life in the cave represents our life and comprehension, on the basis of the world of sensual things, of our captivity by the material and physical objects; and coming out of the cave is the ascension of the soul into the world of ideas, which is achieved by rational and intelligent knowledge.

Plato ends the myth of the cave by asking what would happen to that man who managed to get out of the cave and watch the sun if he went back to the cave and tried to explain to other people who were chained what was really going on and what was the real truth. The others would think that he had gone mad and that the real truth was what was happening on the wall of the cave, and if he tried to free them and take them out of the cave, they would kill him, says Plato, alluding to the fate of the great Socrates.

The parable is also a curve in the plane. When there is something curved in a plane, it may actually be that the wrong is actually right (the curved is actually straight), but the plane determines the parable. The plane is straight (right), and the parable is curved (wrong) until we break away, run out of the cave and look at the sun with our eyes open. Then it becomes clear what is right, what is justice, what is wrong, and distorted. Until then, all life, everything in it, and everyone in it is just shadows on the wall of our own life.

I wish you a good morning. The sun is waiting.