Some web locations contained texts linked to the case of Vladimir Čučović and his initiative which was directed to Banca Intesa in Belgrade.

The on-line discussion and positioning of a ‘little man’ in front of a ‘big company’, with the ‘ever mighty’ citizen medium -> the Internet <- in the middle, was appealing enough for me to deal with.

Things, as usual, are not black and white.

Based on the information by the on-line sources writing about the event, as well as on the documented facts which I received as soon as yesterday (Sunday), I will try to explain three aspects of this case:

1. Attitude of Banca Intesa towards its users’ security and…

In February, Banca Intesa received an on-line initiative by Mr Čučković presenting a complete solution for the visual and structural appearance of their web-site. Čučković mentioned later on the e-criminal portal that this well-meaning initiative was sent without any financial expectancy, i.e for free. The Bank’s official attitude, however, stated the following:

…not for free, as he said, but in replace to a ‘support’ to a project e-market in the value of 50 to 70 thousand RSD a month. As a proof, we are attaching both messages sent by the subject to the bank. After the consideration of the offer, we decided that it was not interesting for us and kindly thanked Mr Čučković. 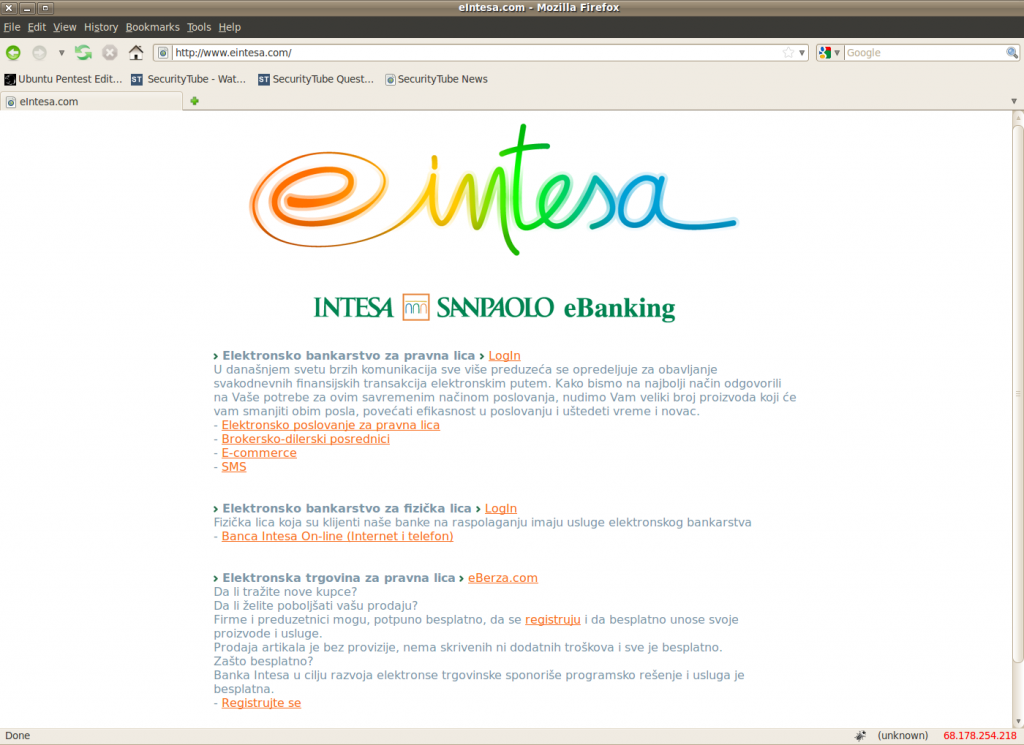 The Bank responded with the following e-mail:

We thank you for your suggestion.
At this moment, we have no interest in developing such Bank portals.

With regular on-line monitoring (some companies really do this), the Italian headquarters noticed the existence of this site and that it implied the activities of an official character, so they elaborated Group’s reaction to the office in Belgrade:

We noticed a content which can lead a visitor to a thought that this is one of bank’s official internet presentations. Due to the fact that the website contains the logo of Intesa Sao Paolo without our permission, in addition to the promotion of the services of e-banking, we hereby bring charges to the Department of defense against high tech criminal, part of the Ministry of Internal Affairs, since, besides the unauthorized use of the company’s logo, we consider the site prone to all kinds of misuse, such as phishing, blackmails, etc. in the future.

What’s very important to point out here is that financial institutions have a huge responsibility towards the protection of its users and their data, and no matter how relevant the risk is, in most number of cases it is treated under very strictly determined procedures. The reaction is instant -> the reaction is fast (you don’t say for banks!) -> the reaction is synchronized.

This is particularly significant when it comes to situations even close to phishing, a form of Internet fraud which has increased, on a global level, extensively.

Phishing is a way of attempting to acquire sensitive information such as usernames, passwords and credit card details by masquerading as a trustworthy entity in an electronic communication. Communications purporting to be from popular social web sites, auction sites, online payment processors or IT administrators are commonly used to lure the unsuspecting public. Phishing is typically carried out by e-mail orinstant messaging,[1] and it often directs users to enter details at a fake website whose look and feel are almost identical to the legitimate one. Phishing is an example of social engineering techniques used to fool users,[2] and exploits the poor usability of current web security technologies.[3] Attempts to deal with the growing number of reported phishing incidents include legislation, user training, public awareness, and technical security measures. – Wikipedia.

If a financial institution should react in any different way, we should definitely be worried.

In accordance to the procedures, the international process against Mr Čučković was initiated.

2. The attitude of Banca Intesa towards a citizen’s initiative

We thanked the subject via e-mail. All further communication was to be done by ways of official investigation structures.

When sending the official attitude of Intesa, Maja Kolar, director of corporate communications of this institution, further explained this relation:

After being informed that we initiated arbitrage and after the Ministry of Internal Affairs had contacted him, Mr Čučković sent a letter to the bank demanding to speak to some of the officials. As per his demand, he received a call from a colleague from the Department of management of users’ satisfaction. In this phone call, Mr Čučković insisted that the arbitrage be dismissed or he would ‘adress the media’. The colleague informed him that the arbitrage had been instructed by the head office of the groupation and hence could not be stopped, since this was not in accordance to the Group’s policy.

Čučković described the incident on the portal e-crime and a few days later this was announced on Istok’s blog titled: ‘ Catastrophic PR of Banca Intesa Belgrade’. In addition, links related to this event were posted on Twitter, Facebook, and finally on GlobalVoices. A strong on-line reaction was a result of empathy by the internet users, but also of a very based impression that banks were truly too rigorous, slow and institutions oriented to a one-way communication. Just enough motives for everyone (including me) ‘to take sides’ on this man who had a good intention and an interesting initiative not asking almost anything in return and who eventually, because of this, became a subject of local and international investigation.

In comments on the post by Istok Pavlović, other users, shocked by the story, shared their negative experiences with this bank with the visitors of the blog, as well as WITH THE ENTIRE WORLD, ONCE AND FOR ALL. Among others, the owner of a company called Madnet showed his discontent, signing his name:

The bank in question seems to know nothing about normal communication. A week or two ago, one of our employees administered a request for a credit. He was rejected and after politely asking them for a reason, he received the following answer: ‘the company you are working for is in blockage or has not payed its taxes’. Naturally, he expressed his concern to everybody in the firm. If this were true, no questions asked, but our company has not once been blocked in the ten years of existence, let alone not payed taxes. The bank received a letter of protest, but to this day we have not received any reply.

In this manner, as a consequence of inarticulate systematic on-line communication procedures, the bank was promoted on the Internet (read -> browsers) in a very bad way, which even if it was not too harmful for them, most certainly didn’t do them any good.

Huge issue: In practice, in most of the cases direct contact and two-way communication solves all the misunderstandings. In the end, compromise is the option which makes all the participants of a negotiation winners… smaller or bigger, but winners. This is not the only and most certainly the last initiative which will be processed officially and without the perception of dialogue and giving meaning to the ‘small’, ‘ordinary’ people. We have the Internet now- so there are no more ‘small’ and ‘big’; What’s more- there are no ‘local’ and ‘global’ conversations. There are no ‘local’ and ‘global’ markets, either -> Markets are a conversation, if we want to reflect on the first thesis by ClueTrain. Bad or reckless conversation by a company with no matter who (or how important that person is) ‘can become global at any moment‘.

In connection to this topic, I sincerely recommend the companies to read the post by Dragan Varagić, titled: Systematic building of relations and trust on the Internet.

3. Attitude of the Sector of corporate communications and marketing of Banca Intesa towards an on-line reputational risk

I contacted Maja Kolar on Sunday around noon via Facebook message:

On various web locations there is a case of Mr Čučković and the initiative he addressed to your bank, as well as the reaction you had to this initiative.

I ask for your quick reply and opinion on this topic, given that I intend to write a post on the blog on citizens’ initiative, reactions of the on-line community and, in the end, the bank, the subject of this entire story.

If you have questions concerning any details you can contact me on 0659300ddj.

Less than an hour later (note that the day was Sunday) I got my reply, as well as the relevant documents from Intesa, but also a call from Maja. In her written statement she said the following:

‘there are certain things you cannot trade and negotiate with. In the case of a bank, this is client security when using the bank’s services, be them transactions on-line, on an ATM or in a branch office.’

Still, what us active bloggers aiming for credibility in the community have to be seriously worried about is this sentence by Maja Kolar:

Thank you for your post. I am pleasantly surprised that any of the bloggers interested in this topic ask for the bank’s side of the story before forming their attitude.

I had to ask myself a question here- was the Serbian blogosphere becoming the same as the Serbian (off-line) mass media: a one-way directed arena?

We can all learn something from this: